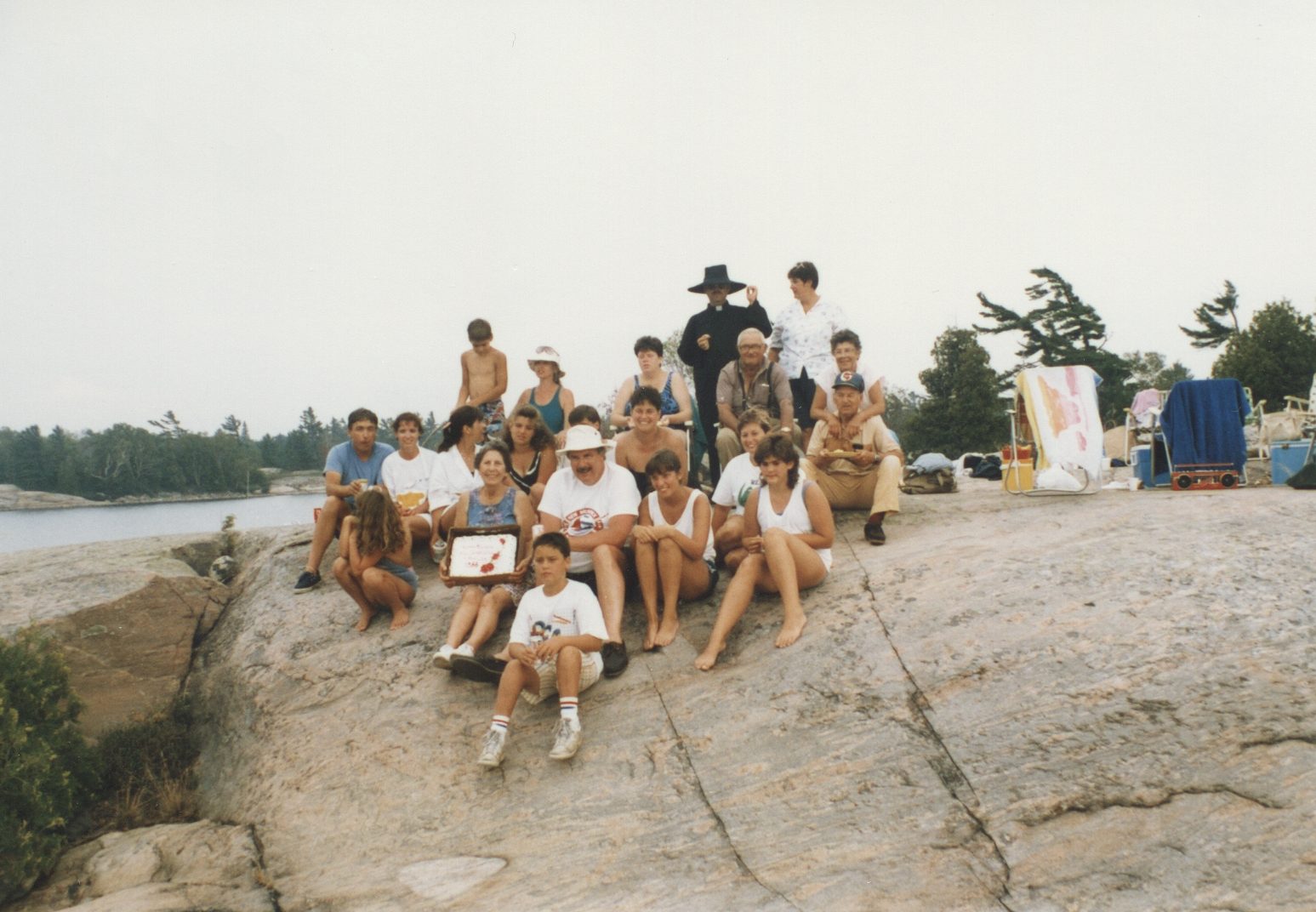 Georgian Bay: July, 1988.  The clouds feather high in the cobalt sky.  When Evergreen floats near the shore, I climb out the nose and jump to the rock holding the rope. My feet splash into the water.  I stumble.  My cousin Michael laughs.

From the bay, dad slides up the slippery rock. I had never seen my dad water ski before. Usually the water is too cold.  He grabs the yellow rope from me and ties it to a boulder.  Water from our feet trickles along the hot, dry island to make it shine.

Uncle Bruce drops the anchor out the back of the boat.

In the shade of the cedars, Auntie Ann and mom pin the red checkered table cloth onto the folding card table.  I spot a box of Tim Horton’s donuts, the blue thermos of red Koolaid, and bags of chips and cheesies. The steel blue cooler sleeps by my feet. I open the lid: macaroni salad, potato salad, bologna, ham.

“Did he bring the costume?” Auntie Ann asks, neatly stacking the paper plates.

“Can you believe it?” Mom says.

I snatch an orange cheesy out of an open bag on the edge of the table. Mom raises her left eyebrow.  I slink away but she notices the Mug root beer. I slid it into my hat when she looked for the plastic forks. My smile drips with charm.

“You’re going to ruin your dinner,” she chimes.

“No I won’t.” I crack open the silver tab on the can and smile again.

She shakes her head and turns away. “Ann, where do you think we should put the cake?” Mom’s gaze drills a hole in my face. “To keep it from everyone until it’s time.” Then mom grins.

I fan my towel five times before it lies just right on the rock next to Andi.  The blue jean coloured water and windblown spruces wave as I watch Uncle Bob and Chantell motor away to a secret fishing spot. The sun twinkles. I tilt my head into the brightness.

Madonna belts “Get into the Groove” on my red Sony walkman.  My pen pal from Germany, Clemens, sent the cassette with his last letter.  Andi lounges on the sun-warmed granite next to me listening to Def Leppard. She oozes coconut tanning oil.

I sip my warm root beer.  “What do you think Lorel is doing?”

At eighteen, Lorel looks just like Brooke Shields and sings the lead in a rock band.

“Do you think it’s because of the snake?”

“Nah,” Andi rolls over to tan the back of her legs.

I wonder how anyone could miss a family picnic.  I close my eyes and lean into the ground imagining my ancestors picnicking on these rocks a hundred years ago. Sometimes when I am out in the bay I feel so connected to the landscape. Maybe I lived on these rocks in a past life.

At our last picnic on the island at Sand Bay, I didn’t see Lorel go into the bush, but we all saw her sprint out.   Yanking her bikini bottom, she staggered, screaming “Snake!”

“Was it a rattler?” Uncle Bruce asked.

Lorel told us how she heard the rattling sound under her as she squatted on the rock. “Ticka ticka ticka ticka.”  When she glanced between her knees a Massassauga Rattlesnake stuck out its tongue, coiled and ready to sink its fangs into her behind.

Dad, Uncle Bruce, and his cousin Wally marched into the bush. I wanted them to slice off its head.

My brother Colin jiggles a wet life-jacket over me.

“I thought you didn’t have to wear a life jacket this year?”

“It’s Sarah’s.” He drops the drenched life jacket on my legs and runs to the other side of the island to give mom a big wet hug.

After dinner we sit by the campfire.  I put on my red Roots sweatshirt and sit next to Uncle Ernest.  His fingers are yellow from rolling tobacco.  I like how he talks out the side of his mouth.

Chantell giggles at Colin when he makes a funny face.  Mom chats with Aunt Bernice about the time dad ironed the living room sheers.  Andi and Sarah snuggle up under Aunt Estelle’s beach towel whispering sisterly secrets. Uncle John shoves another log onto the fire.  Everyone glows from family picnic magic.

Grandpa and Grandma are here too.  Even though I can’t see them I know it.  Grandpa died in 1975, the year I was born. Grandma died in 1979. Mom had lost both her parents before she turned twenty-five.

Aunt Pat, Aunt Estelle, Uncle Bruce, and mom were smart.  They decided to meet on a picnic island on Georgian Bay each summer. They wanted to keep close. They wanted to stay connected to the landscape of their childhood.

Our family history seeped into the moss and granite, whispered through the needles of the lonely spruces.

As dusk begins everyone talks at once. The juicy blend of hushed tones, deep belly laughs, and animated chimes weave and flourish in the spaces between us.

Aunt Bernice sits on a green plaid lawn chair.  She crosses her long slender legs. “Yes, our only entertainment—”

“How did you get there?” Aunt Pat hoots.

“Your father hated it.  Muriel and Ernest came sometimes.  Me, I danced for hours.” Aunt Bernice waltzes. “One two three, one two three…” She freezes.

“Would you look at that!” Aunt Muriel squishes out her cigarette between her loafer and the rock. Everyone turns.

I recognize him instantly as my dad. He wears a black gown with a white collar, large brown sunglasses, and mom’s witch hat without the peak.

“How did a priest get all the way out here?” Aunt Bernice blinks.

“Anda how did you-a come to be all the way outta here? Sucha beee-a-uuutiful lady!”

Father Sarducci’s head bobs. He traces his mustache with a finger. “Iva come with a verrrrrrr-y special message from the Pope. La Papa.”

“In seventy years, I’ve never seen a priest out in the bay. He must’ve walked on water…” Aunt Bernice gasps.

“Ahhh..yes. Iva gotta some miracles to use onca in a while.”

“It’s just me, Aunt Bernice. Dave.” Dad takes off the sunglasses and hat. Everyone laughs.

I’m assigned to the last boatload home.  The hum from the motor on Evergreen’s floor mixed with the rocking of the waves make me tired. I sit at Auntie Ann’s feet wrapped in a large royal blue and yellow beach towel.

I peer over the side of the boat at the red and white building, Gereaux Island Lighthouse. I imagine Grandpa climbing the ladder in the tower to change the oil in the lamp on a foggy night. And then I imagine Uncle Ernest and Aunt Bernice playing with giant turtles and waving at the passing oil tankers. I wish I grew up on a lighthouse too.

With the boats unloaded we settle into the warmth of the cottage.  Outside, the black sky swallows the last bit of light.

Uncle Ernest tunes his guitar.  Aunt Estelle and Aunt Pat sip white wine by the woodstove.  Mom laughs at something Uncle Bob says when he joins her on the couch. I lean on the grey stairs leading up to my bedroom in the loft.  On the top step, Andi and Chantell flip through a songbook. 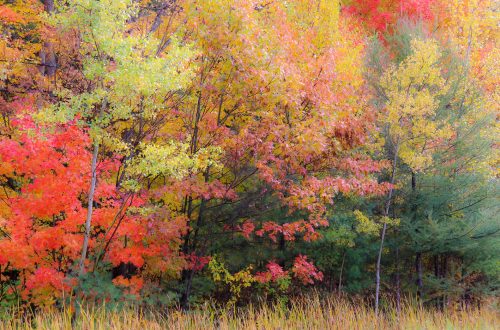 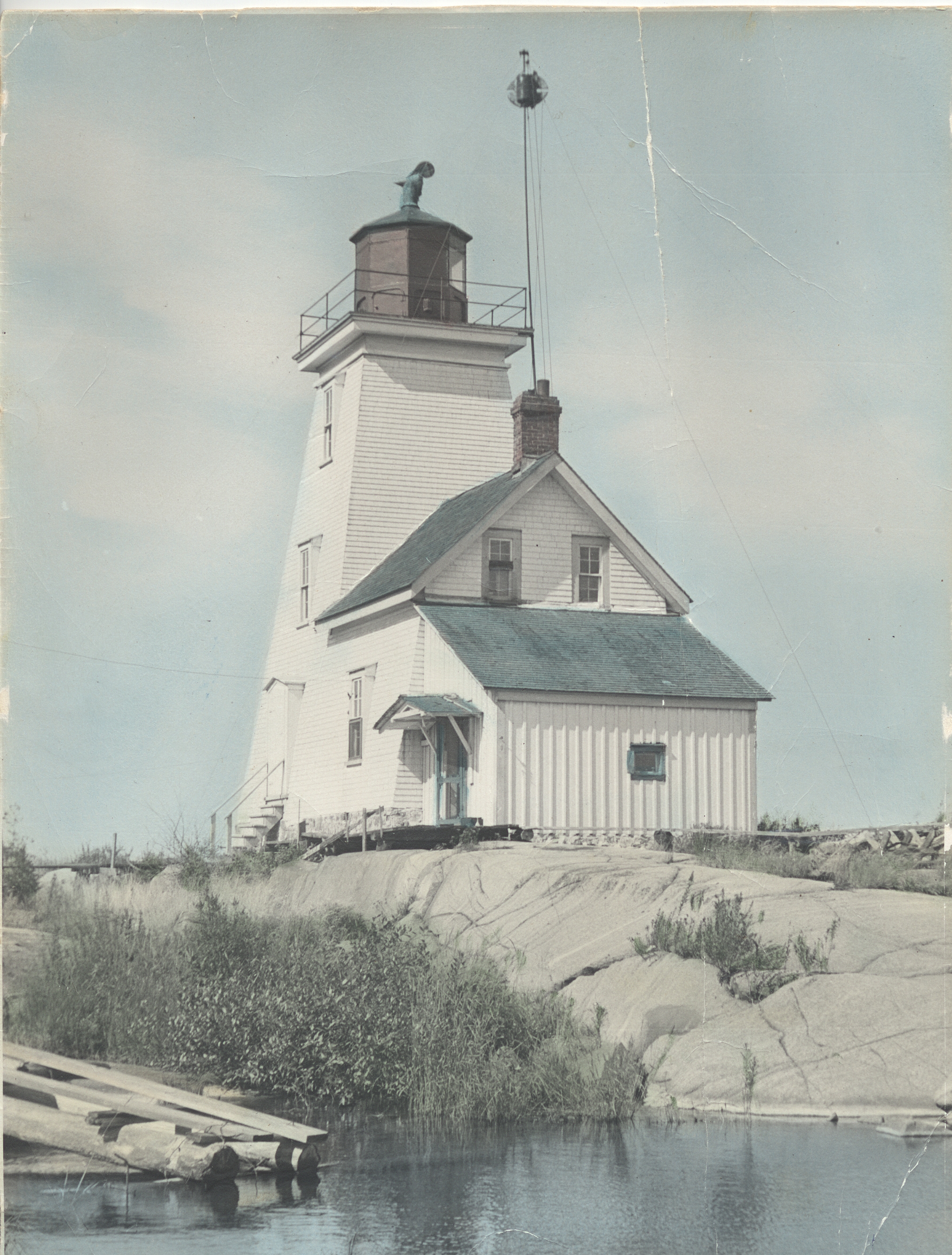 Gereaux Island Lighthouse Then and Now

Sunrises and Sunsets on Georgian Bay 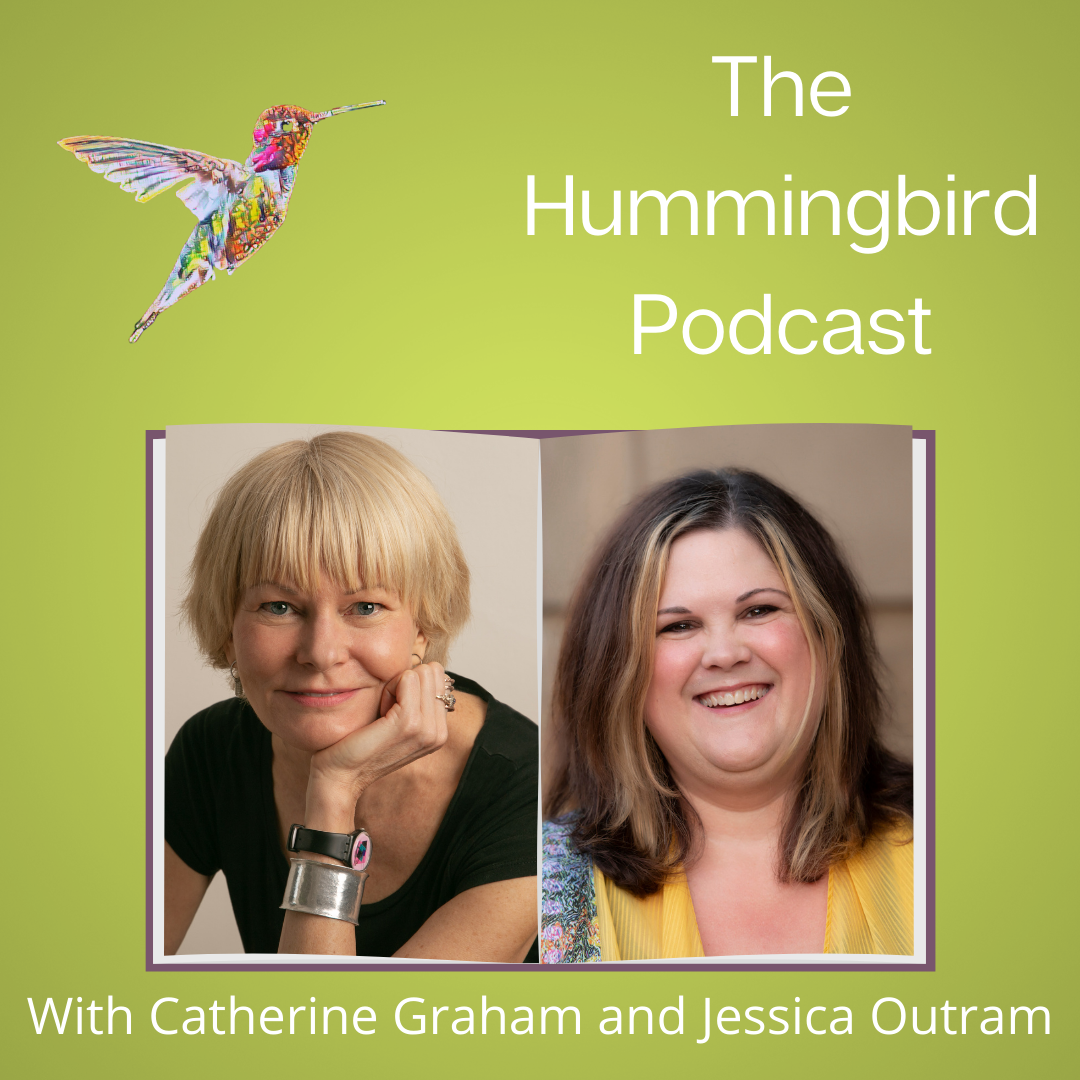 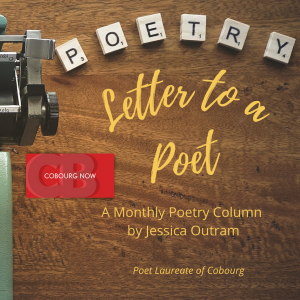 Over 2,000 plays of the Hummingbird Podcast!! More

Looking forward to reading with @catgrahampoet for

A beautiful cool morning for walking by the lake.

So delighted to meet my youngest nephews today, Hu

What a gift to start the day with such a beautiful

So grateful for peaceful summer evenings by the wa

A perfect summer’s evening by the water.

Blue sky day on the bay.

Beautiful day on the water. So delighted for a cha

This month in Letter to a Poet, Katie Hoogendam is

Can’t get enough of this view.

High winds! Standing on land and trying to find th

We've been hearing from listeners of the Hummingbi

Entering into reading this book for the third time

Books are restocked at Let’s Talk Books in Cobou

Energized by these blues at the lake today…

The joy after the rain…such a beautiful breezy m

Thrilled to have some poems included in this new collection. To be launched @northumberlandfota this fall! ... See MoreSee Less

Over 2,000 plays of the Hummingbird Podcast!! More episodes coming soon. The conversation evolves out of the episode before, but there are no rules, so feel free to try one of our top 5! thehummingbirdpodcast.com/#poetry #poetrycommunity #poetsandwriters #artspodcast ... See MoreSee Less